For Aidan, who is age 7 and functions about on a 4-5 year old level, I am presently using these resources:

We are extremely flexible. His motivation to learn is excellent; so when he is unfocused I take it as a developmental issue rather than a discipline problem. My primary goal is to build attention since as CM says it is the prerequisite for many moral and intellectual habits.

She mentions extending a baby's or toddler's attention: "the baby, notwithstanding his wonderful powers of observation, has no power of attention; in a minute, the covered plaything drops from listless little fingers, and the wandering glance lights upon some new joy. But even at this stage the habit of attention may be trained: the discarded plaything is picked up, and, with 'Pretty!' and dumb show, the mother keeps the infant's eyes fixed for fully a couple of minutes––and this is her first lesson in attention."

I haven't thought of it as "lessons", but this is the sort of thing that can easily be worked into day to day life. My mother in law, without even having heard of CM as far as I know, is a natural at this -- making things fresh and new again by some very spontaneous type of gesture to encourage that little bit of extra attention. Aidan's older siblings also do this quite naturally in the course of playing and interacting with him.

Anyway, it's become second nature for me to find the very slight stretch that's beyond Aidan's "natural" attention span but to move to something else before he is squirming and over-pressured. I'm not saying I always get it exactly right, but it's a habit for me now to TRY, anyway!

Now to the specifics:

We have a book of very simple Bible stories and I don't expect narrations, just attention. I extend his attention by interacting with the text and with him. We do the Five in a Row approach -- not extra activities, at least not yet, but repeating the same story as many times as he is still interested in hearing it. In the end he knows the story by heart and can repeat sections and make connections to other contexts which is the closest he is yet to a narration.

This is the same approach we use for his literature. He loves simple repeating board books like Brown Bear, Brown Bear.

With the Child-Sized Masterpieces he is doing great and simply loves matching them! They have become his treasures. We extended this into "music matching" where my daughter plays the opening bars of a song on the keyboard and he IDs it. He is good at this and loves it, and since he is deaf in one ear we are working on therapy goals of hearing discrimination too. 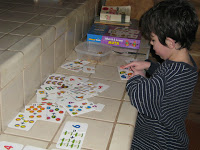 We use Horizons Kindergarten Math as a spine for math; we happened to have it around the house from years and years ago (none of my other kids did Math in K so we hadn't used it). It is colorful and visual and Paddy (younger brother) likes it too. We supplement with hands-on activities and we move slowly since he is still learning one to one correspondence.

He is actually a bit ahead of the game in 100 Easy Lessons and just starting to blend a bit. We also use Starfall a bit and I am experimenting with some Montessori activities. He really enjoyed the Red Letter Alphabet Book as well as the blue Number one so that is obviously a good approach for him.

I work with him a LOT on memorization partly because it helps with hearing discrimination, partly because it lays down auditory patterns in his head which have been useful to him in the past in extending vocabulary and mean length of utterance, and partly because he absolutely loves to memorize. He is very retentive; has amazed us by being able to say the Rosary in Latin just because his oldest brother and I were working on learning to say it all last summer.

His sister works with him on memorizing songs and quotes from old movies, which is a game to both of them, and I work with him on prayers. We do this very informally. Most of this takes place in odd corners of the day -- I like the Montessori idea of flexibility within limits and he responds well to that. So I do have expectations but we work with what he's capable of that particular day. ... which varies. The main need for structure is MINE, so I can ensure his needs don't fall by the wayside when I get busy with the older ones. I usually don't really do Kindergarten, so I'm not used to it!

Just before Christmas I started to experiment with a weekly visual calendar for him and he responded great to that so now I am using a bedtime routine chart with him..... sort of like this(HT: Kim) I took photos of things like his toothbrush, his foot brace etc and laminated them and velcro-ed them to a poster board and that helps us both move through the evening events without forgetting anything. It helps ME, actually.

Science is nature study, and health and hygiene, and very unstructured.
PE is physical therapy and fun things like sledding on the driveway, carrying firewood and pushing his Tonka truck around. He gets a few vaguely academic "homework" assignments from his occupational and speech therapists and sometimes I extend them a bit particularly if he seems to like them. 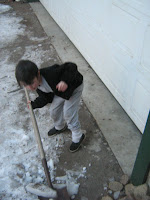 We have extended the food art mentioned in the last post, with great results. Aidan loves to help in the kitchen (supervised, of course). He watches us do chores and strives to imitate us.

Aidan rather LIKES structure and ritual and seeks it out. But our structure doesn't go further than he does -- in other words, he has responded badly when therapists in the past have used structure to try to take him further than he was developmentally ready to go. I don't know if that makes sense. The structure needs to be a support, not a sort of stretching rack, for him.
Posted by Willa at 10:19 PM

That all sounds great. As he advances, you might be interested to know that DK (I think) has a math workbooks with stickers. My friend gave us one a couple of years ago for a plane journey but she had used it with her son who didn't write well. It was very visual and there were sheets of stickers with the answers to the problems wo you stuck them in.

"The true, the good, and the beautiful...

......have much greater reality than do the false, the evil, and the ugly, which latter are too often idolized in the larger world. So I urge you to bring reality to that world - to take whatever you have grasped here of the true, good, and beautiful out into that larger world, so much in need of what is real rather than what is illusory."

1 I have lifted up my eyes to the mountains, from whence help shall come to me. 2 My help is from the Lord, who made heaven and earth. 3 May he not suffer thy foot to be moved: neither let him slumber that keepeth thee. 4 Behold he shall neither slumber nor sleep, that keepeth Israel. 5 The Lord is thy keeper, the Lord is thy protection upon thy right hand.


convert to Catholicism, 7 children, homeschooling 3 this year... the rest is probably on the blog somewhere or other

Retreat to Quiet for Little Children

Reasons Behind the Rules

Places I Go on the Web

click on the picture to go to his story 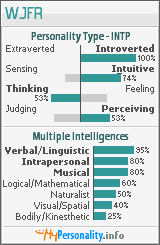