For some reason I have been so tempted to rename my blog Exceptio Probat Regulam. Don't ask me why -- it doesn't even seem to fit, really. I found it in Newman's Apologia Pro Sua Vita -- it is Latin for "the exception proves the rule". I just like the way it sounds! I am a bit like my 7 year old -- I pick up on some new word or phrase and then it runs through my head for days. At least, Exceptio Probat Regulam is better than "Many Cheerful Facts about the Square of the Hypotenuse" which is the other phrase that has been accompanying me everywhere these days.

Back to "exceptio probat regulam" --maybe it does fit a bit. We do seem to live a bit that way. We have a log home... and eight computers hooked to each other through a local area network. We are remote from civilization 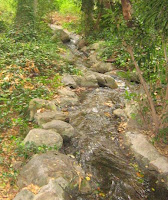 in miles but can access the World through the web at the click of a mouse. We have drying clothes strung on our loft railing because our dryer hasn't functioned for almost a year, yet we have books -- and computer games -- everywhere. We have a gas-guzzling Suburban but our family fills every seat and it's our one car. Both of the parents freelance at home. Our income varies wildly from year to year, and it does not seem to really matter to anything that counts. We do classical unschooling. WE live in a part of California where you can drive an hour and move from sequoias and cedars and snow down to dust and heat and farmland.

I think this is why we are all Chesterton fans around here. Chesterton spent his life looking for the strange place called "Mooreeffoc."..... in other words, the paradoxical, the mystery in the prosaic everyday, the thrill of discovery in the banal and everyday places of life. As Tolkien writes: 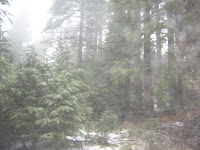 Mooreeffoc is a fantastic word, but it could be seen written up in every town in this land. It is Coffee-room, viewed from the inside through a glass door, as it was seen by Dickens on a dark London day; and it was used by Chesterton to denote the queerness of things that have become trite, when they are seen suddenly from a new angle.

My daughter uses this Chesterton quote as the tagline for her blog:

So true, and this is another one
(and look -- I think it's a chiastic structure! how cool!):

Ask Bilbo Baggins! That could sum up what The Hobbit is about in one line!

I strive for a "Regula" but I cherish the "Exceptions". Every natural object has a certain identifiable order but all have some unique feature which separates them from the others of their kind. All my friends and family -- I cherish the common ground I have with them but delight in their differences, that amuse and interest and enlighten me. Often it is not the order in my day that makes it memorable, but the deviations -- the extra inconveniences and adventures. I think all this is a reflection of our Lord, who made us all so diverse within a given order, and surely intended it that way.

Mooreeffoc would make a good blog name, too, I'm thinking. Probably has been done already. Yep, I knew it.
Posted by Willa at 6:32 PM

I like that last GKC quote. Shame Mooreeffoc has already been used as a blog name!

By the way I have tagged you for a Thinking Blog meme. Here is
the link.

I like all those names - it is so hard to find something that hasn't be taken, isn't it! I have a problem with not liking things after I pick them, too. :-P

I tagged you, too, for the Thinking Blogger's Meme...

"The true, the good, and the beautiful...

......have much greater reality than do the false, the evil, and the ugly, which latter are too often idolized in the larger world. So I urge you to bring reality to that world - to take whatever you have grasped here of the true, good, and beautiful out into that larger world, so much in need of what is real rather than what is illusory."

1 I have lifted up my eyes to the mountains, from whence help shall come to me. 2 My help is from the Lord, who made heaven and earth. 3 May he not suffer thy foot to be moved: neither let him slumber that keepeth thee. 4 Behold he shall neither slumber nor sleep, that keepeth Israel. 5 The Lord is thy keeper, the Lord is thy protection upon thy right hand.


convert to Catholicism, 7 children, homeschooling 3 this year... the rest is probably on the blog somewhere or other

Retreat to Quiet for Little Children

Reasons Behind the Rules

Places I Go on the Web

click on the picture to go to his story 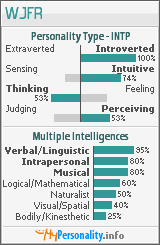